1,000 is the number of steps it takes to get from the nearest bus stop at US 19 and Roosevelt Boulevard to the Walmart Supercenter located on the corner—rain or shine.

PSTA thought they could do better, so they changed it to seven.

Not only will riders and employees of nearby businesses now have a convenient, comfortable place to make transfers, they will also be the first to enjoy PSTA’s new bus shelter design. With a teal roof and clear blue glass on one side, the new shelter design is sleek and modern, while still being functional and practical with plenty of seating, shade, and trash receptacles. 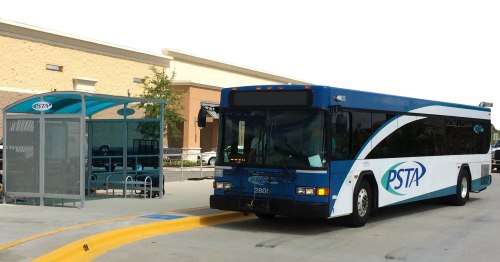 Largo Transit Center will deliver significant value to the lives of riders, making it easier to transport heavy loads of groceries, get to work on-time, and move more efficiently across the entire reach of Pinellas County.